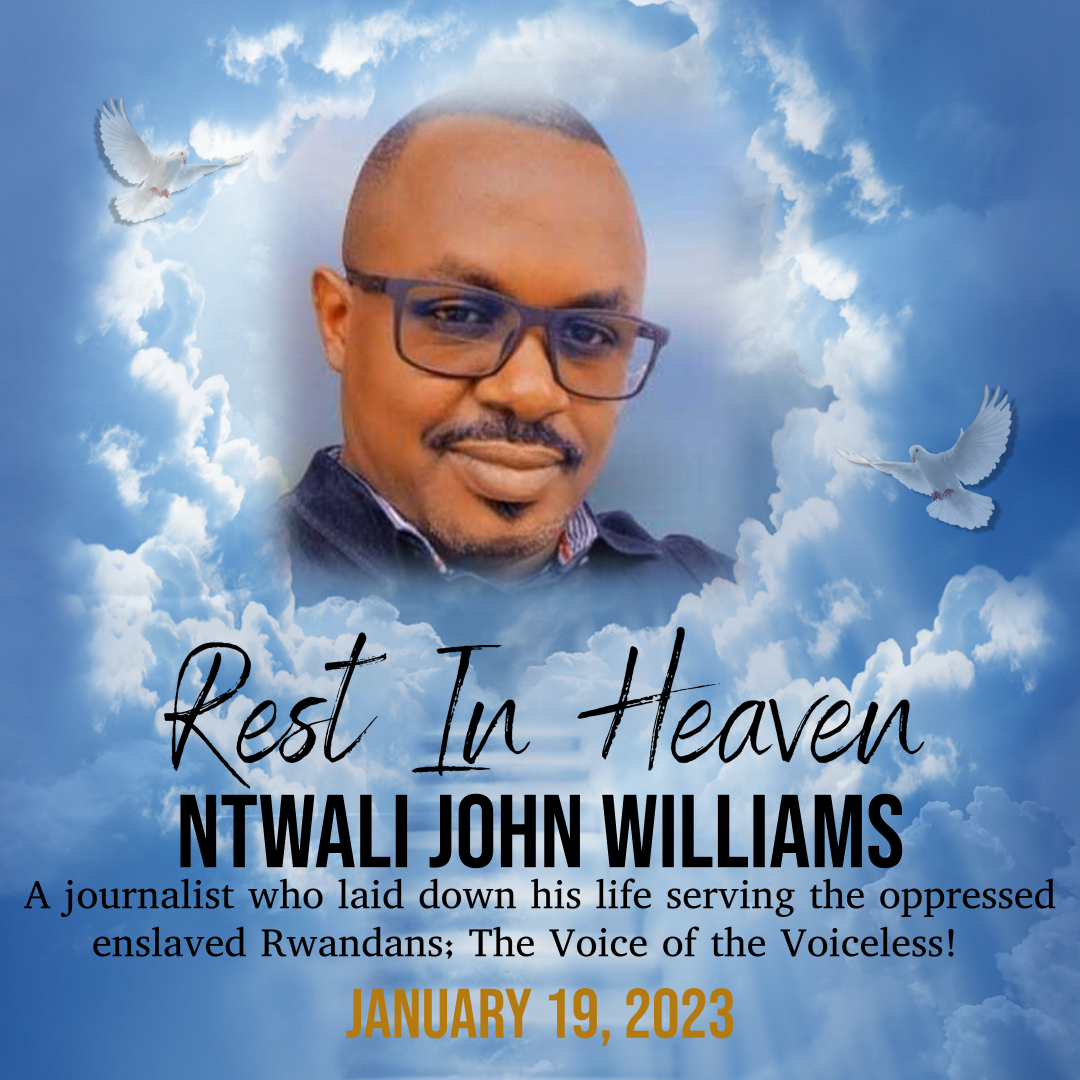 On January 19, 2023 we learned the death of Journalist Ntwali John Williams, the seemingly last independent journalist in Rwanda, who joins a long list of journalists, government critics & human rights activists who died after exposing the truth. All the Rwandans we spoke to in diaspora and inside Rwanda have no doubt that he has been murdered by “Rwanda Killing Machine” preached by General James Kabarebe in 2022; The same Rwanda killing squads who are murdering thousands of people inside Rwanda and DRC & abroad in the broad day light as Kagame once said in his speech, “we will shoot you in the broad day light!”

According to BBC Gahuza, the last time Ntwali was seen in public working was on January 13, 2023 when he was reporting on the trial of his imprisoned comrade, professor & media researcher Christopher Kayumba. Friends talked to Ntwali Tuesday January the 17th early evening but they were unable to reach him afterwards.

Ntwali was receiving constant threats by Rwandan government seniors who reproached him for exposing the truth. His YouTube reached thousands of viewers. On Al Jazeela, he said, “Being jailed,and receiving dead threats come with my job here in Rwanda. I am focused on justice, human rights and advocacy, and I Know all those are three areas that are risky in Rwanda but I am committed to.”

Friends,have reported that Ntwali was snatched from his home in Kigali by Rwanda authority, Tuesday evening on Jan 17 (contrary to police report). After snatching him from his home, they first tortured him for about 2 days before his killing on Thursday.

His brother Mugabo told BBC news that the police called and told him that Ntwali was involved in a motorcycle accident and was hit by a car and that he died on the spot. But his other brother Emmanuel told BBC that on Thursday, he was called by the police who asked him to come and identify whether the body they have was of his brother; that they did not know whose body it was. The brother was taken to the morgue then and confirmed it was indeed Ntwali,

On the day he disappeared, Ntwali had
reported on a shocking YouTube story titled,
“AN ENTIRE FAMILY’S LIFE HANGS IN
THE BALANCE.” It is A story of a poor woman
named Sam Gisele Umugwaneza. She was
beat up by 2 Rwanda police until she lost her
hearing and became an invalid. By not being
quiet about the incident, Gisele was kidnapped, leaving behind 3 children aged 15, 12 and a
younger one. The kidnappers who were not in uniform but were indeed security agents came also after the kids to harm them. The kids reached out to Ntwali who reported on this story and posted it on Tuesday January 17.

In this show, big names in Gisele case are mentioned: Yolanda Makolo, John busingye, Dan Munyuza, Kanyamihigo Rutagarama, Colonel Bahizi Theodomile, General Mubarakh MUGANGA who is the Rwanda army chief even president Kagame. When reporting on this story, Ntwali shared about the threats he received including death threats. In fact, for several times, in the past few weeks, he sometimes spent the night in bushes or unknow places because they were seeking his life to destroy him.

Threats were also directed against him on social media. A certain Ndoli @ndoligitare on twitter kept threatening Ntwali. Twitter picture below shows Ndoli listing all journalists now in jail and he threatens that Ntwali would be next to join…

There are other reports by @ndoligitare that are life threatening to Ntwali that you can find on twitter account of @ndoligitare. Please report!

To the real fearless journalist #NtwaliJohnWilliams, who laid down his life saving oppressed & enslaved Rwandans – To you we dedicate this report. May God bring you justice speedily. Ntwali had asked, “who will speak up for me?” He spoke for us all, let’s speak up for him by sharing.

All the world, come to the rescue of the voiceless Rwandans! People are being brutally murdered – Killed like something that has no value!

EVERYONE SHOULD HAVE THE RIGHT TO

These are Basic Human Rights given to each individual by God Almighty ~ Ambassador for International Religious Freedom, Sam Brownback (emphasis added)

Buy it on Amazon Wordwide

Reverend Christine Coleman is a writer, motivational speaker, televangelist, and the founding pastor of Blazing Holy Fire Church. For more…

Righteousness and justice are the foundation of Your throne; Loving kindness and truth go before You (Psalm 89:14)